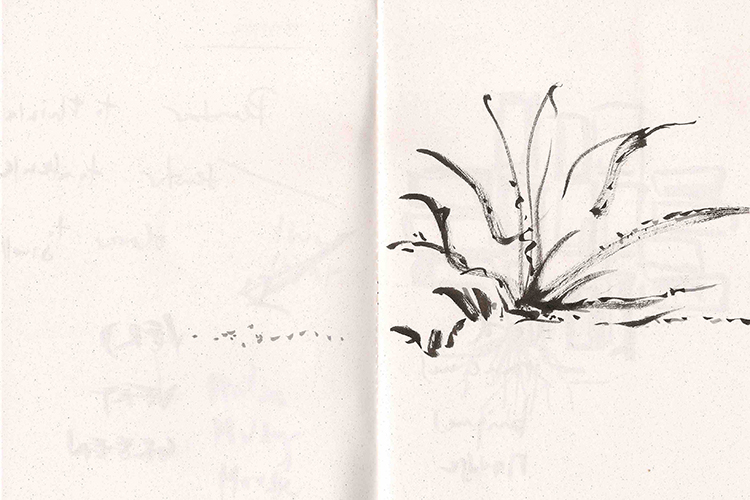 Vegetal and Some Other Creatures

Map of the Garden with its Plants 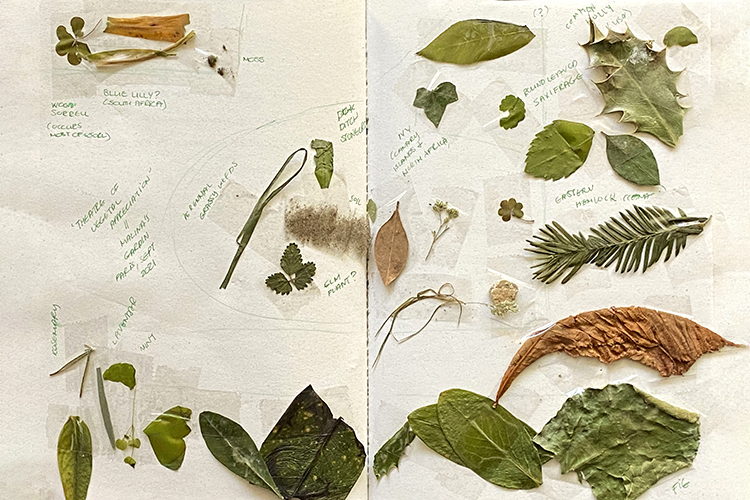 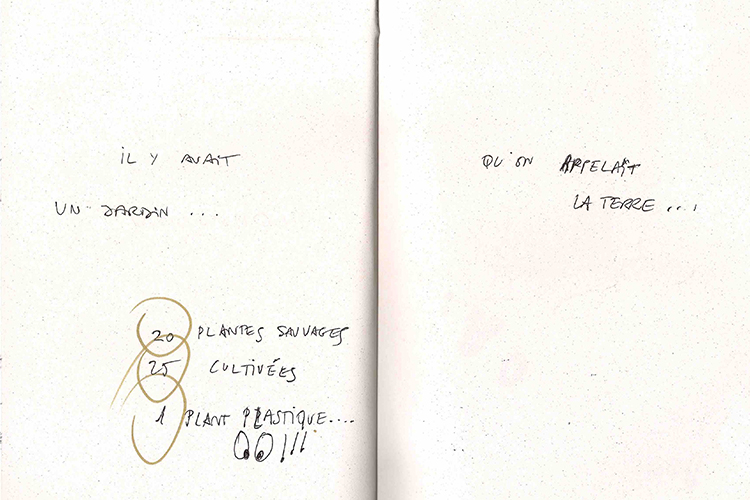 [Fi] There was a Garden that was called the Earth* 20 wild plants 25 cultivated 1 plastic plant * First line of the lyrics of a song by Georges Moustaki, French singer born in Egypt from Greek origins.

[Len] I see a dormant edible landscape: hidden nasturtium, Moroccan mint, wild sage, laurel which certainly benefits the snails more than the residents.
Plants that I am discovering, that I would like to cultivate like this delicious large green leaf scalis. 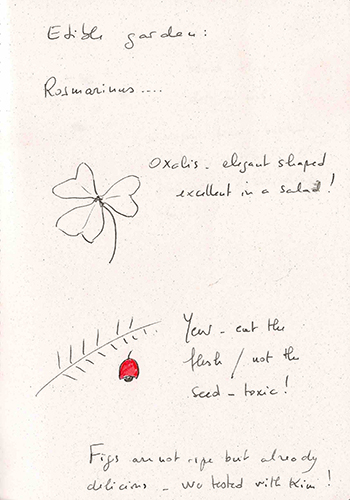 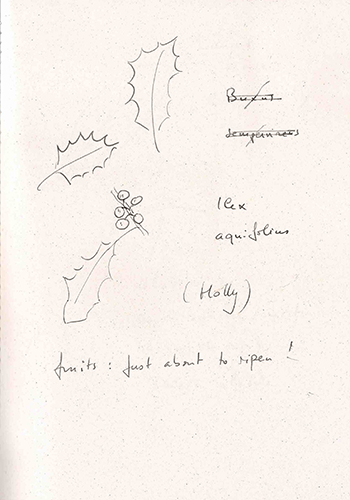 [Se] Figs are not ripe but already delicious – we tested with Kim !

[Va] The second – and last – plant of the garden that I have chosen for wandering is the one that gives its name to my hometown, Figueres, in Catalonia. In the garden of the Malina house, the fig tree is big, stately, almost spectacular as part of the place where it grows. All in all, the fig tree is resilient: I have even seen as epiphytes, growing on a palm tree –Phoenix canariensis-! The wood of the fig tree is not very resistant, it does not burn well, it is little appreciated. In contrast, the latex of this plant has medicinal properties, it solves warts, for example.

And we come to the fruit, in fact to the set of fruits grouped in an infructescence, the fig, technically called syconium. Who has never tasted a fig ?!
Going back to toponymy – and anthroponymy – which has been prolific with the fig tree, in my language, Catalan, ‘figa’ and ‘figuera’ have given rise to numerous place and person names. As I said, among them is the name of my city. On the coat of arms and flag of Figueres, we have two showy leaves of our symbol tree, and a poet from Figueres, Carles Fages de Climent (Figueres, 1902-1968), recommended to the local rulers « Mayors, do plant fig trees in the heart of the city » and, in the same poem, which is a model of integration of botany (and traditional knowledge about biodiversity) and literature, addresses the tree saying “To you, our tree, which name envelops the city itself, which delights shade”.
I conclude, then, by greeting the fig tree in the garden of the Malina house – and with it all the fig trees. 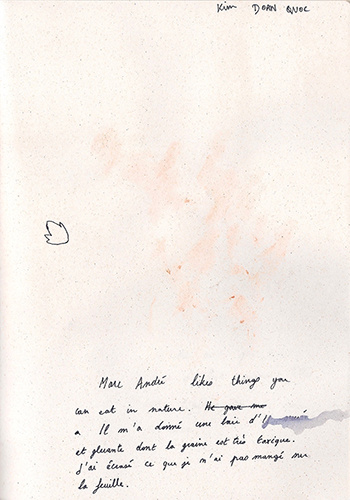 [Qu] Marc-André likes things you can eat in nature. He gave me a slimy yew berry whose seed is very poisonous. I crushed what I did not eat on the page. The figs are not quite ripe yet. They have a slight coconut taste. 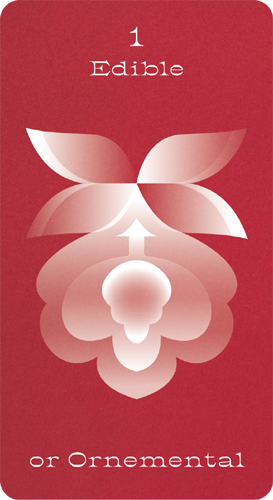 Tilia (Lime)
Tree used as an ornamental. Its inflorescence and bract are traditionally used as a tranquilizer and for colds.

Aesculus hippocastanum (Horse chestnut)
Its chestnuts are used against hemorrhoids. For such use, you have to carry a chestnut in your pocket. This fact reflects the loss of traditional knowledge, since it is known that it was used, but not the mode of use.

Rosmarinus officinalis (Rosemary)
It is used preserved in alcohol for massages that calm musculoskeletal pain. It is used as a seasoning for meats and to darken the hair, it must be rinsed with an infusion of the plant.

Rosa sp.
Rose petals have traditionally been used for eye problems, generally in infusion or maceration for eye baths or by applying wet compresses to the eyes. Widely used as an ornamental plant.

Hedera (Ivy)
Climbing plant, used as a dye. The fruits present certain toxicity, although the plant has traditionally been used as medicinal.

Taxus baccata (Yew)
Tree used as an ornamental in landscaping. It grows naturally in mountain areas. Its fruits, reddish in color, are eaten by birds, but toxic to humans!

[Va] In the garden of the Malina house there is, as we have said, quite a variety of plants, especially considering the small space. In addition, there are many plants, with different uses and applications, the result of a secular interaction between people and nature, very relevant in terms of biodiversity management, conservation and resilience (which is not only the conservation and resilience of the plants themselves, but also those of the traditional knowledge of ancestral origin, which are linked to it). There are ornamental plants, some are aromatic and medicinal, others – or the same – are food, some are harmful or toxic, many plants appear in all categories. Indeed, there are many ornamental, medicinal, toxic or other uses at the same time. We know all this thanks to our ancestors who, with trial, error and success, have bequeathed us a hybrid heritage of nature and culture, which we must preserve. 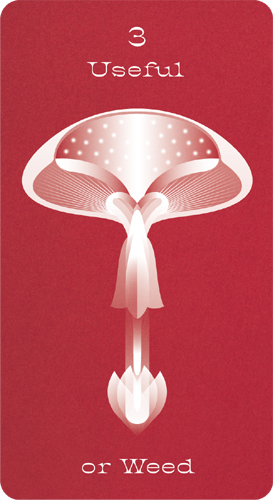 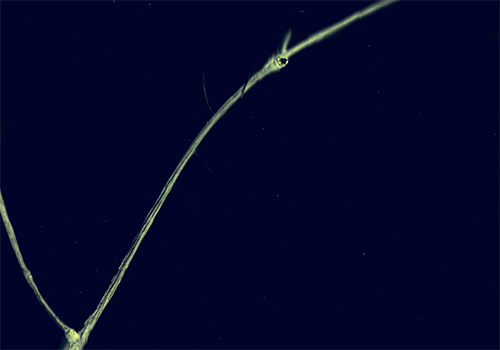 Cartographying
Trapping the garden with the growing plants and sliding snails.
Not a question of identification counting present species but catching presences.
Asking plants for a trace, their traces, their ghost on the paper.
Growing together an animated herbarium, a living herbarium.
Beyond the oxymoron, with the least human intervention as possible, gathering vegetal presence, creating a sort of surfaces of presence for the vegetal beings.

What will you see on the images?
The garden through vegetal movements and dynamics, stems, branches, leaves exposed on the surface.
This mapping invites to think the garden from the outer surface of the plant to the inner surface of the paper, thinking by surface, thinking from-with the surface, from the exposure of the plant to its milieu of life, to the exposures which will reveal their presence.

15 sheets of photosensitive paper are placed under - behind - in contact - with a a plant often between the plant (vine, linear, creeper, verticality, hooks) and a flat surface (wall, plank, face) and exposed to the sunlight. This process enables capturing traces of the body of the plant without extracting it from its milieu of life. Once exposed, the plates were immerse in water in order to remove the photosensitive substances and fix the image.

Half of the photographic sheets are removed from the environment at the end of the day.

Half of the photosensitive sheets are left in contact with the plant throughout the night. Will the nighttime humidity help reveal the image? The movement of the body of the plants, their dynamics, the intertwining of their stems, their lianas, their leaves are inscribed on the surface. 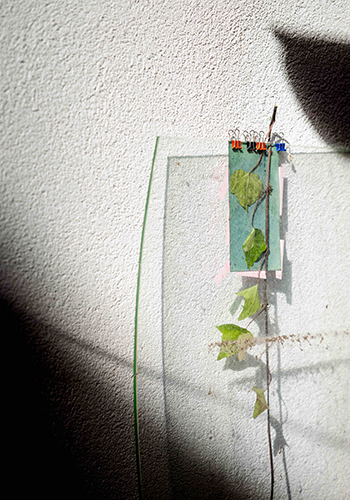 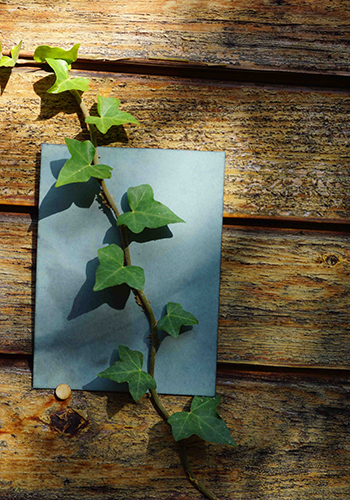 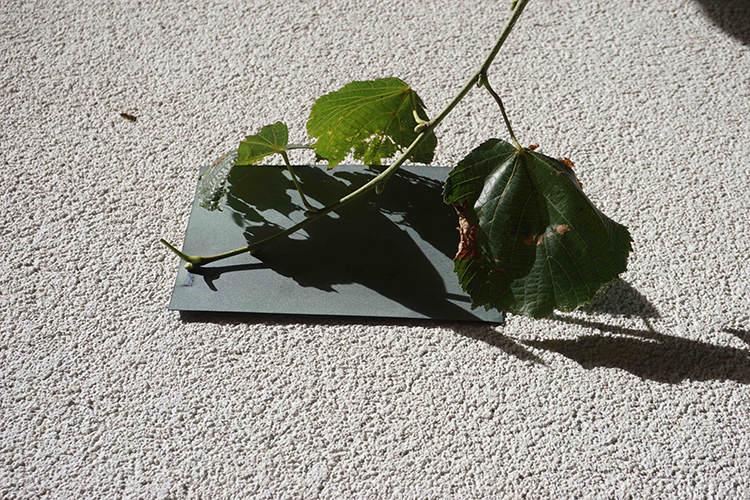 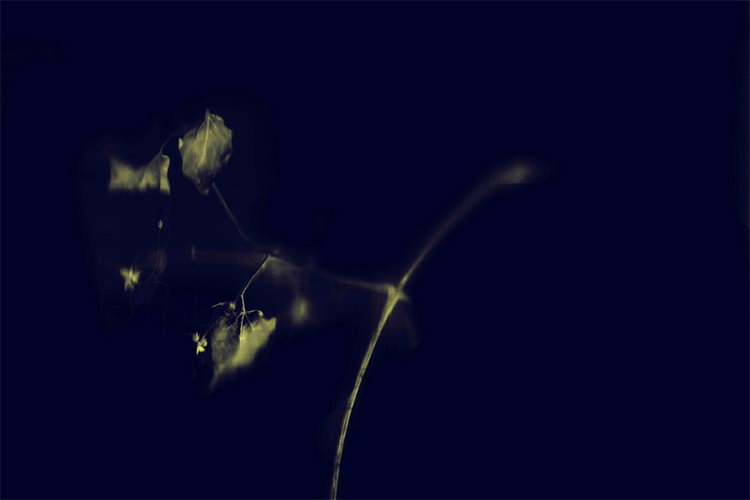 We, the others for the plants, we other plants (Michael Marder) 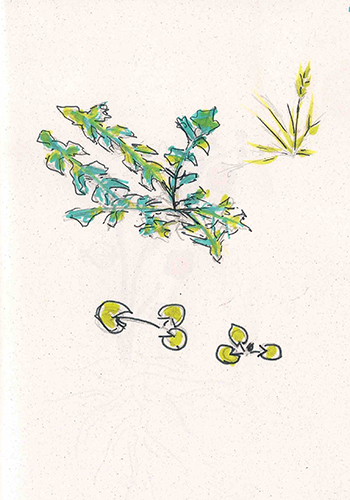 [Na] The plants in the garden (inventory, an attempt) 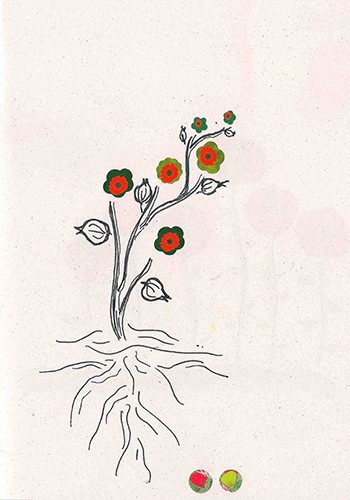 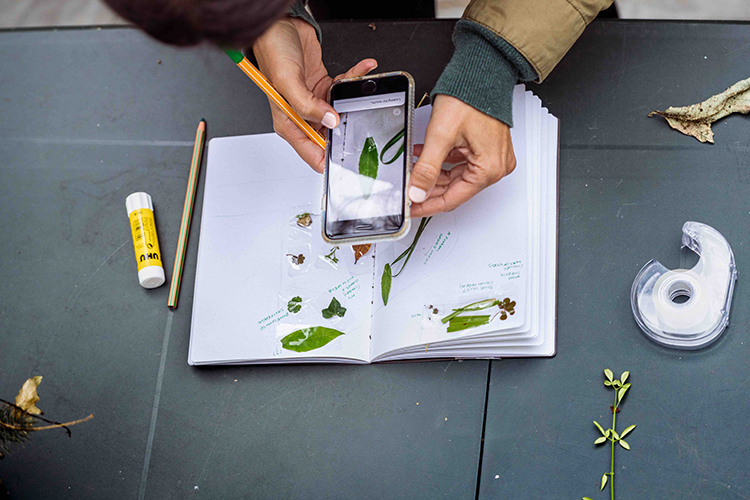 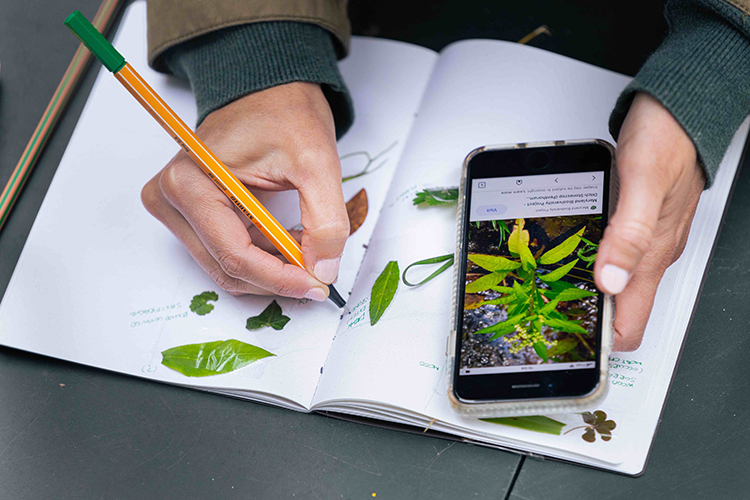 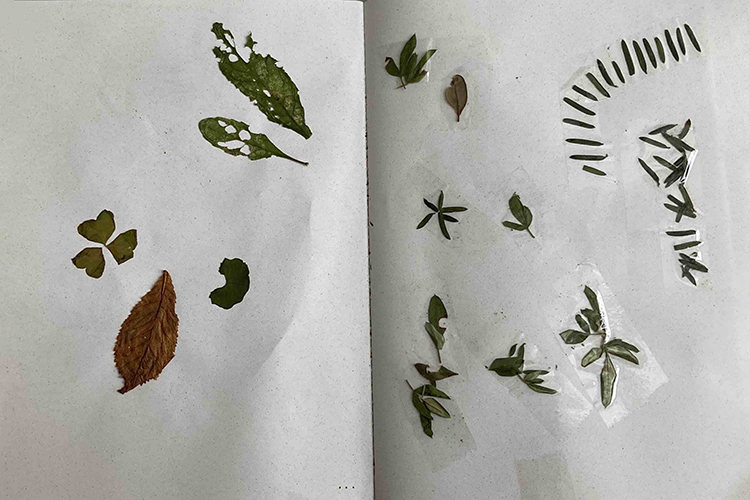 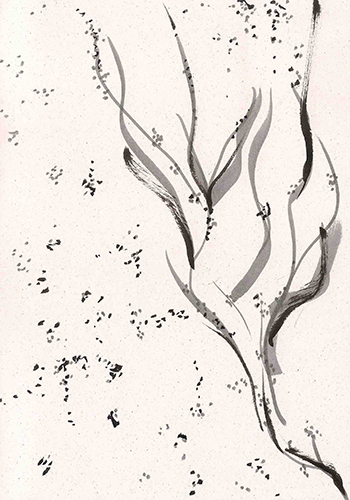 Singled Out: the Yew 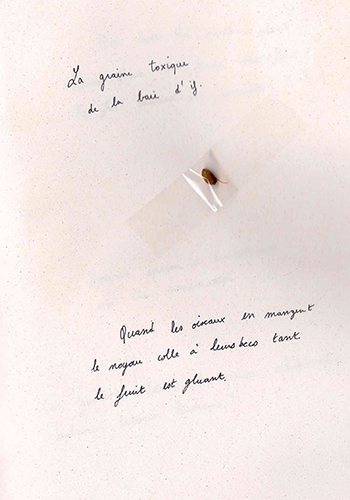 [Qu] The poisonous seed of the yew berry. When the birds eat it, the seed sticks to their beaks because the fruit is so sticky. 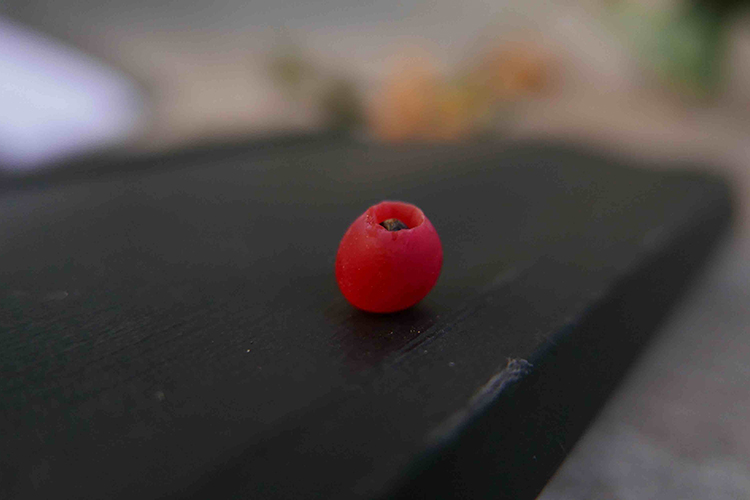 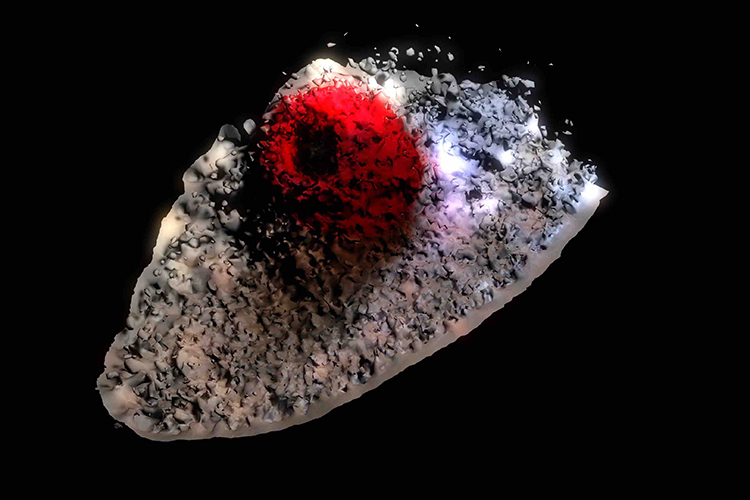 [Qu] The images I produced from data collected during the Roots & Seeds workshop at Maison Malina. The data is collected in the form of photos, there is a series of about 150 images to produce the 3D object. 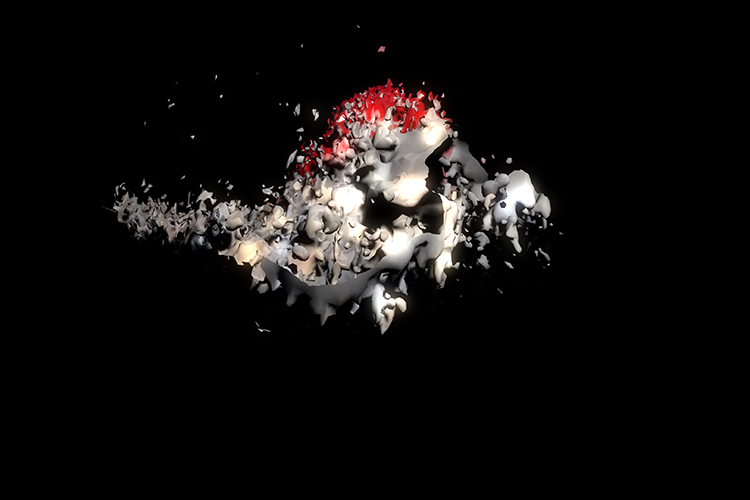 The AI built into the software I use to produce the scan calculates the dimensions, distances and colours from these photos.

[Va] In the garden of the Malina house, the yew has a situation of resistance, totally suitable for the Roots & Seeds project. In fact, the yews of the house are not, as they often are in nature and in other gardens, majestic trees, but sprouts, probably from some previous large tree. However, they do not lose their visibility, presence and relevance.I would like to point out a botanical aspect of this plant, which shows that even scientific terminology is sometimes inaccurate, alas! Yew has male and female individuals, as is common in animals, but not so much in plants. The females fructify and, in this case, do not make a cone like many of the yew’s close relatives (gymnosperms), but a seed (Roots & Seeds) surrounded by a fleshy, juicy red structure (the aril). Gymnosperms have not the seed closed inside a fruit (as is the case with a peach –Prunus persica-, for example) and therefore (which is already indicated in the word ‘gymnosperm’, which means bare seed ), do not have proper fruit, but fructification. However, the scientific name ot the yew includes the epithet baccata, which means ‘with berry’, and berry is a type of fruit (such as grape –Vitis vinifera– or tomato –Solanum lycopersicum-). This shows us that science is not as accurate, precise, and rational as it may seem. This is a small flaw, an anecdote, but I found it interesting to point it out.

Finally, I want to highlight the relationship between yew and people.
Human societies that have been in contact with yew have come to know it deeply. They have observed that it is a highly toxic plant, but that birds eat its fructification and then defecate it – and scatter its seeds. With this, humans have discovered the food potential of yew arils, while respecting the seeds, which are as toxic as the leaves. Yew wood has also been used. And relatively recently, anti-cancer potential has been found in the bark. In addition, it has generated toponyms in different languages (the Font del Teix in Catalan or the literary Château d’If in French, for example).
In short, the encounter between yews and people has generated an important corpus of knowledge. 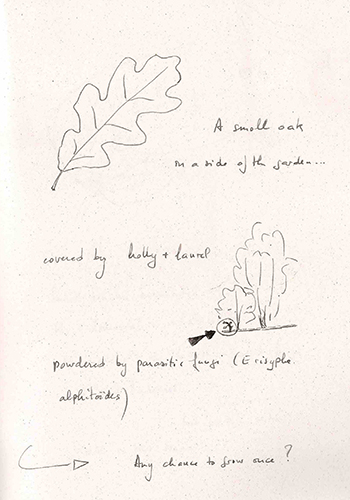 [Se] A small oak on a side of the garden... covered by holly + laurel powdered by parasitic fungi (Erisyphe alphitoïdes) Any chance to grow once? 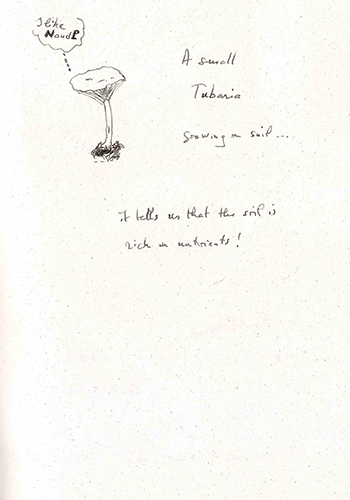 [Se] A small Tubaria growing on soil ... It tells us that the soil is rich in nutrients! 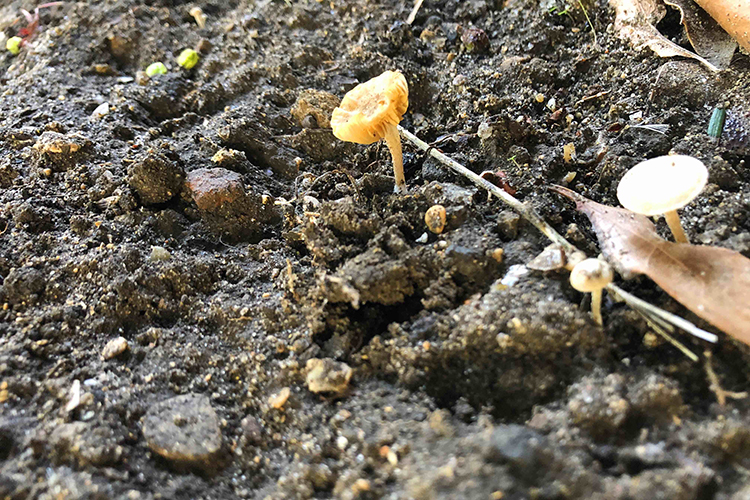 The Smell of the Garden 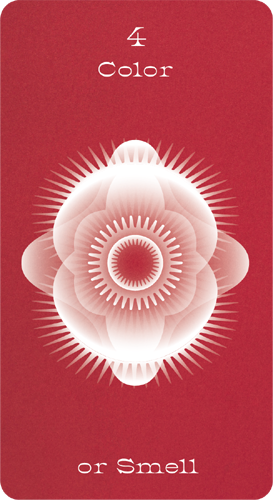 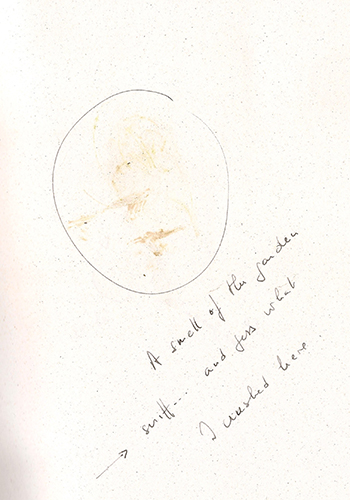 Roots & Seeds XXI. Biodiversity Crisis and Plant Resistance is an international cooperation project between Ars Electronica (AT), Leonardo/Olats (FR), University of Barcelona (ES) and Quo Artis (ES) as lead partner. It is co-funded by the Creative Europe Programme of the European Union. Leonardo/Olats has the support of the Daniel and Nina Carasso Foundation.

Project developed with the support of the Creative Europe Programme of the European Union.